How Many Beers Are In a Keg

The cost of beer in kegs1 is much lower than in cans or bottles. This is why you can save a lot of money if you buy a keg of beer for your party or picnic. Everybody can guess that it contains a great deal of beer, but do you know how much exactly? The answer to this question can vary, depending of the place you live in. First, let’s talk about kegs a bit in order to be sure that everyone has the idea how they look like.

As a rule, kegs are made of aluminum, stainless steel or wood. They are commonly used to store, transport and even serve different types of beverages and alcoholic drinks, carbonated or non-carbonated, like beer. Kegs are usually pressurized in order to preserve the taste and quality of the products.

Kegs may come in various sizes, and there are no any standards. The table below will help you to find out how many beers can be in different types of kegs.


The US beer barrel is officially defined as a volume unit which is equal to 31 gallons. This is why a full keg is named a half barrel, though it has 15.5 gallons. Most brewers use this kind of kegs, so we can make some calculations and answer how many beers are in a keg.

But do not forget that we are talking about the American half barrel keg. Standard European kegs are somewhat smaller. For instance, an import keg contains fifty liters, which equals to 13.2 US gallons. The tiniest keg is called “Bubba”, or mini keg. It is manufactured for retail sales and contains only 5 liters. Some kegs are recyclable.

A full half barrel keg weighs almost 73 kilograms (more than 160 pounds); though an empty one has only 13.5 kilograms (less than 30 pounds). The keg’s typical height is 23.3 inches. 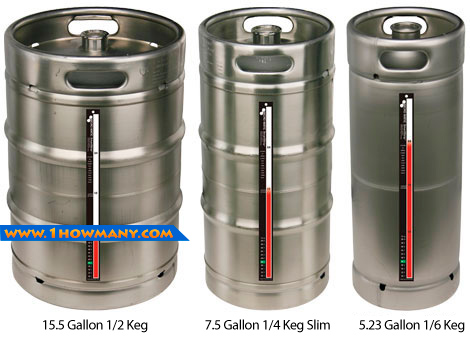