How Many Zeroes Are in a Billion

The question, “How many zeroes are in a billion?” may seem ridiculous. But are you sure that you know the exact answer to it? If you ask Americans or Europeans about it, most probably, they will tell you the following:


But citizens of many non-English speaking countries may give you another answer:


What answer is right? If fact, both variants are, and now you will know why it is so.

The Long Scale and the Short Scale

In the modern world, there are two different scales, which use the term “billion”. They are called the long one and the short one. These terms were first used by Genevieve Guitel, the French mathematician.

In the short scale1, a billion consists of a thousand millions. It means that it has nine zeroes. But in the long scale2, a billion means a million millions. Thus, it has twelve zeroes.

The table below will help you to understand it better.

In some countries the word “milliard” is used to denote the nine zero number.

As a rule, in English speaking countries the short scale is in use, while most of other countries prefer the long scale.

Facts about a Billion

It is not easy for an ordinary man to comprehend the practical meaning of a billion. Read these facts, and you may be amazed.


Do you understand now how rich Bill Gates is? He’s got tens of billions dollars. 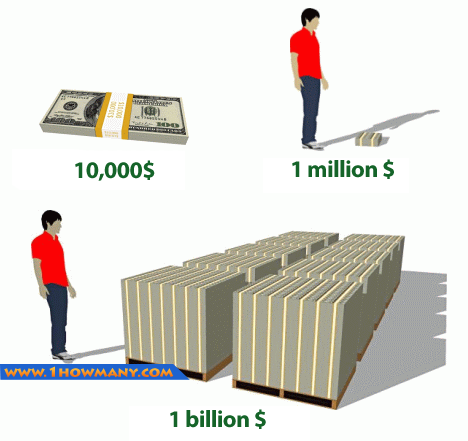