How Many Bones in the Human Body

The skeletal system1 plays an important role in our bodies. It supports and protects internals such as lungs, heart, brain, kidneys, etc, but it performs some other functions too. For example, it also fixes the muscles; stores the bone marrow2, which is the source of blood formation; provides calcium for the whole body, etc.

Bones make up the “structural frame” for the human skeleton. If we had no bones, we would not be able to move, our internals would have poor protection, and they would lack blood and calcium. As you can guess, we have many bones, but do you know their exact number.

There can be two different answers to the question about how many bones are in the body, depending on whether we mean babies or adult humans.


Now, if somebody asks you, “How many bones are in a human body?” you can give the correct answer:

The number of bones changes because in the process of growing some of them fuse together during first years of life. The most illustrative example of this phenomenon is the human skull. In fact, formation of bones never ends. They are constantly renewed throughout life. Several types of cells take part in this remodeling:


Scientists divide all the bones into four groups: short bones, long bones, irregular bones, and flat bones. They are also distributed in two different systems: the axial skeleton and the appendicular skeleton. The stapes3 is the shortest bone (about one tenth of an inch), and the femur4 is the longest one.

The table below will give you useful information about the names of different bones and their numbers.


All the bones support and maintain our body making the adult human skeleton. You should also remember that some people have extra ribs or lumbar vertebra, though not everyone has sutural bones.

Some Facts about Human Skeletons

Here are some interesting facts about human skeletons: 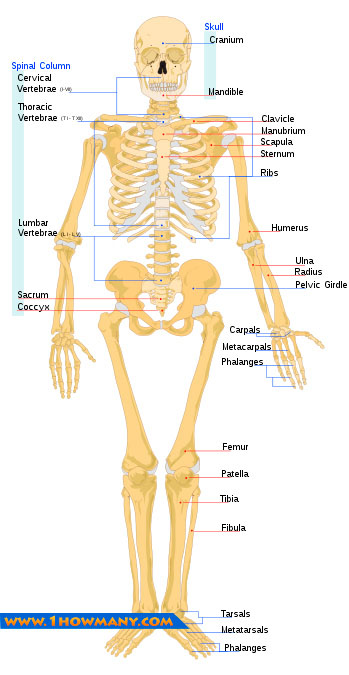