How Many Countries in the World

Dec 28, 2019 Probably, the most frequently asked geographical question is about the number of countries in the modern world. Frankly speaking, it is not easy to give the unequivocal answer to it. Different sources give various numbers, and most of them have every reason to persist in their opinions. So let’s try to find out, how many countries there are actually in the world.

The United Nations and the Unites States’ Department of State

The United Nations1 have 193 members, so many people use this number as the answer to the question about how many countries there are in the world. But some countries, like Kosovo or Vatican City, though they are not members of the United Nations, are still independent. Isn’t it enough to account them countries? Thus, it seems that 193 is not the right answer.

The State Department2 of the United States of America recognizes 195 countries in the world, including the two ones we meant above. But it does not recognize some other countries, which are also independent now, like Taiwan. China still claims that it is one of its provinces, and most other countries agree with it.

Some colonies and territories can be mistakenly called countries, but in fact they do not have their own governments and other traits of independent states. Many people often confuse Puerto Rico, Greenland, Bermuda, Palestine, or even Scotland, Wales, England, and Northern Ireland as being countries. But they are not fully independent.

There are some countries in the world that are sovereign de facto, but they do not have international recognition. Abkhazia and South Ossetia, which used to be parts of Georgia, are self-declared states. They are recognized only by Russia and couple of other countries.

Pridnestrovie, Nagorno-Karabakh, Somaliland, State of Palestine, Western Sahara are in the similar situation. They are more or less independent, but the world recognizes them as being parts of other countries.

But there is an entity which is the most unusual one among unrecognized countries. It is named the Principality of Sealand and is based on Fort Roughs, a former Maunsell Sea Fort, located 7 miles off Suffolk, England. In 1967, the facility was occupied by Paddy Roy Bates, retired British Mayor, his family and associates. They are sometimes called the smallest nation in the world, but Sealand was not recognized by any sovereign state. 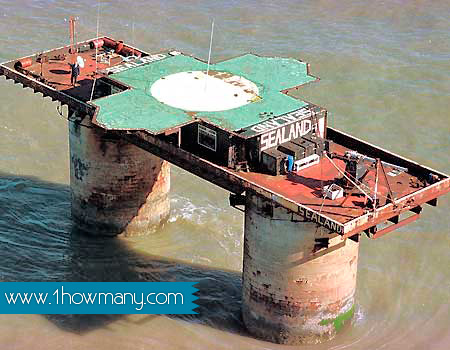 So, answers to the question about how many countries there are in the world can be different. Which one you choose, depends on your political views.

Now you can read about Top 5 countries in different interesting nominations. These pieces of information may help you to decide where to go on vacation.