How to Draw Manga

It is obvious, that if you want to know how to draw manga1, you do not need explanation what manga is. So let's move on to our step-by-step lesson. We will teach you how to draw a manga boy face. It is not a character from a particular cartoon or comic book. It is just a model for learning basic principles. 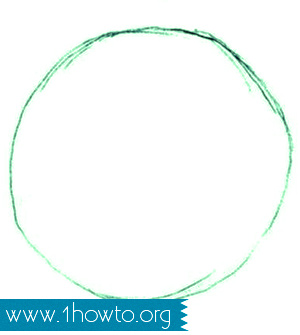 The main part of any manga character is his/her head because it bears all the distinguishing features of the genre. This is why you should start drawing any personage from his head.

First of all, draw a circle. Do not worry if it is not perfect. 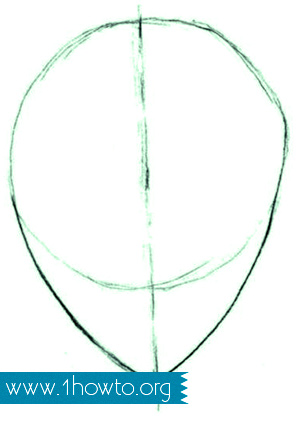 Now you should find the circle's center. Then pencil a vertical line starting from the top of your circle and finishing below it by approximately half its diameter. The line will become the guideline of your boy's chin.

If you are drawing a young character, make his face rounded and his chin short. For older men draw slimmer faces and longer chins. 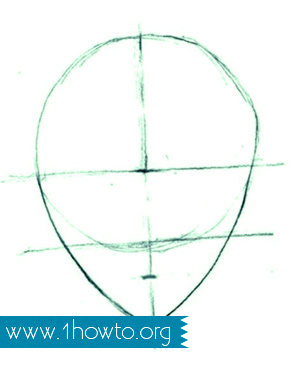 If you want your character to have correct face proportions, you have to draw several guidelines.

First divide the vertical line in two and draw a horizontal line across this point and the head's width. This will be the eyes guideline.

Then halve the part of the vertical line between the chin and the eyes and pencil one more horizontal line. It will show where the nose's bottom line should be.

Now you have to divide in half the segment between the chin and the nose line and draw the last horizontal line. It can be short because it will indicate the shadow that the lower lip casts. 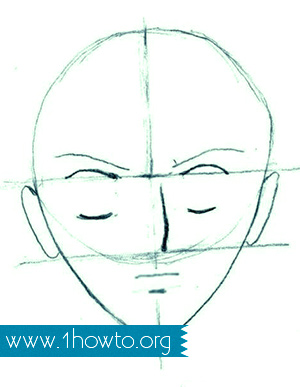 Now draw facial features of your character like they are shown in the picture. Pay attention to the guidelines. They will show you where to draw the ears, eyes, brows, nose, and mouth.

Remember that there should be about five eyes' length between the ears. It means that you should divide the line in five equal parts and draw eyes in the second and the fourth ones.

Indicate eyebrows by simple slightly curved lines. You may place them higher or lower, so do not be afraid to experiment on them.

The line of the mouth should be half way along the vertical line between bottom of the nose and lip's shadow. 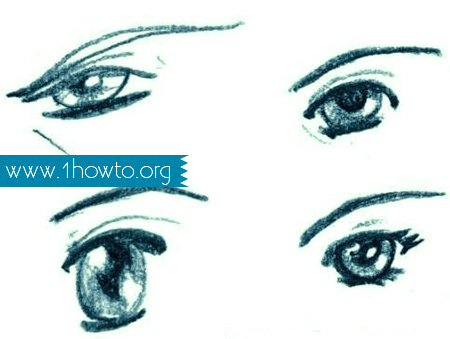 While learning how to draw manga, you should understand that there are very many ways of drawing characters' eyes. We will give you some hints but you can follow your own rules.

Most manga eyes do not have corners. They are just suggested.

Draw a shadow on the eye which the upper eyelid casts.

The eyebrow usually has almost the same shape as the upper eyelid.

You should better draw more highlights in girls' eyes than in boys'.

Girls' eyelashes should be longer than those that boys have.

Remember that eyes are always the most distinctive facial feature, and you should pay special attention to them. Try to make them unique. 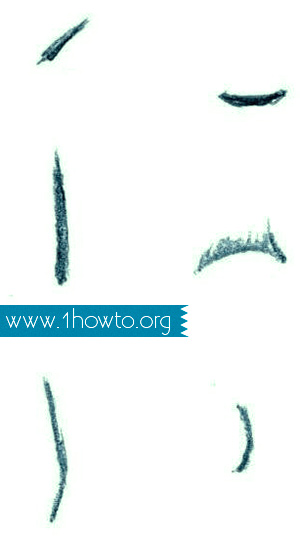 Manga noses can be of different sizes and shape, but as a rule, they are simple (look at the picture above).

You can shade the nose a bit or draw nostrils, though it is not obligatory. 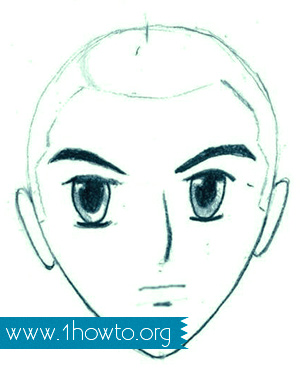 Now you can start drawing your character's hair. First pencil the hairline. There are no strict rules about it, so you can draw it any way you like. If you do not know how to do it, look at real people's faces and copy their hairlines.

Then draw a line where your character's hair parts. 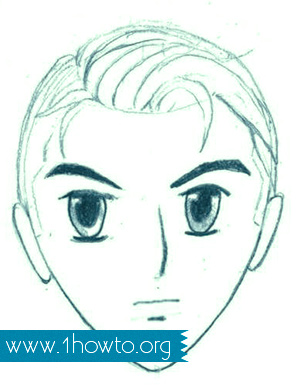 The hair of your character should be drawn outside of the main circle. This way it will look more believable. First, block out its sections and outline them. It will be difficult to draw the hair by separate strands.

Do not forget that locks of hair on each side should be smoothed in the same direction. 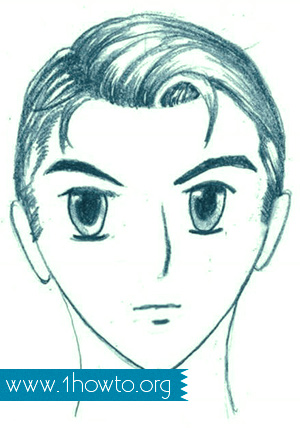 In order to make the picture look more realistic, you should shade the character's hair. If you want the hair be shiny, the change from light to dark should be abrupt. Look at photos of some people if you do not understand how to draw shadows.

Then you can add the neck drawing slightly curves lines and make some other final touces.

That's it. Your character is complete, and now you know how to draw manga faces.