Dec 27, 2019 In the modern history of the United States of America there was no greater tragedy than the terroristic acts on September 11, 2001. The series of four attacks carried out by al-Qaeda1 took away thousands of lives, and that day is notorious as the 9/11. Four passenger jets were hijacked. Two of them were crashed into the World Trade Center2, the third hit the Pentagon, and the fourth plane was directed toward Washington, but it crashed in a field, because its passengers and crew fought the terrorists.

On September 11, 2001, nineteen al-Qaeda terrorists hijacked four planes on the way to Los Angeles and San Francisco after they took off from Washington and Boston. They chose long flights because such airplanes were heavily fueled. The Twin Towers of the WTC in New York City were their first targets.

American Airlines Flight 11 was crashed into the North Tower of the World Trade Center at 8:46 a.m. There were five hijackers on the board and 88 passengers and members of the crew.

Another five terrorists flew United Airlines Flight 175 into the South Tower of the World Trade Center at 9:03 a.m. There were 65 people on the plane including the hijackers.

Five more terrorists took control of American Airlines Flight 77 and at 9:37 a.m. they directed it into the building of the Pentagon. There were 64 people (including the terrorists) on the flight.

United Airlines Flight 93 was controlled by four hijackers, and they were going to attack either the White House or the Capitol. But the crew and passengers on the board fought the terrorists, and at 10:03 a.m. the airplane crashed in a field near Shanksville, Pennsylvania. There were 41 passengers and members of the crew on it.

All 266 people who were on the four flights died. Some of them had been killed before the planes crashed.

The South Tower of the WTC was burning for almost an hour after the crash of United Airlines Flight 175, and at 9:59 a.m. it collapsed. The North Tower was in fire for 102 minutes following the attack and crashed down at 10:28 a.m. Its debris fell on 7 WTC building. They damaged it, the fire started, and at 5:21 p.m. 7 WTC collapsed too.

The suspicion fell on the militant group al-Qaeda, founded by Osama bin Laden3. Initially, he rejected involvement in the attack and told about it in his statement, shown by Al Jazeera4 channel. In 2004, he accepted the responsibility for the terroristic acts.

In response to the attacks, the USA launched the War on Terror. They invaded Afghanistan to fight the Taliban, who supported members of al-Qaeda. In 2011, bin Laden was caught and killed.

In the World Trade Center and near it there were 2 606 persons, including:


On the airplanes there were 246 members of the crews and passengers. All these people died.


During the attack on the Pentagon 125 military personnel and civilians died. 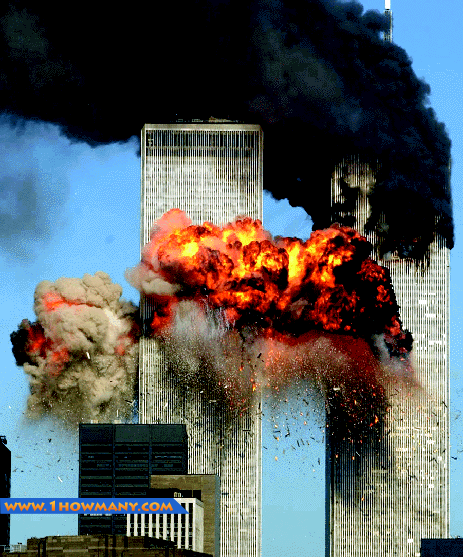