How Many Rings Does Saturn Have

Dec 27, 2019 Saturn is known to be the only planet which has visible rings around it. If you want to find out how many rings Saturn has, go on reading. The answer to this question is not that simple. You will also know many interesting things about this unique planet.

The name of Saturn is of Roman origin. In the religion of ancient Romans Saturnus was the major god who was in charge of agriculture and harvest. He is supposed to be equal to such gods from other myths as Cronus, Ninurta, and Shani. One of the days of the week, Saturday, is named after this planet.

Saturn stands the sixth from the Sun and is situated between Uranus and Jupiter. In the whole Solar System1 there is only one planet larger than Saturn. It is Jupiter. Saturn, Jupiter, Neptune and Uranus are gas planets, and together they are called the Jovian.

You may be surprised to know that Saturn would be able to float in water. Its density is 0.687 grams/cm3, while water on our planet has density of 1 gram/cm3. Saturn consists mostly of helium and hydrogen though it also has some heavy materials in the core. So you would not be able to stand on its surface.

Saturn’s radius is about nine times larger than the one that the Earth has. But it spins on its axis very quick. That is why its year is more than twenty nine Earth years long, but its day has no more than ten and a half hours.

As stated above, Saturn has a distinctive feature, which it is widely known for. Of course, we are talking about its ring system.

Though people discovered Saturn thousands years ago, they had not been able to see its rings because it is impossible without a telescope. In 1610, Galileo observed the rings but thought them to be Saturn’s two moons. Dutch astronomer Christian Huygens had a more advanced telescope than Galileo, so in 1655 he was able to scrutinize the planet thoroughly and espied the rings.

In fact, these rings are not solid. They are made of separate parts. As they reflect about 80% of the light, there is every reason for thinking that they are chunks of ice, though gravel, dust, rocks, and similar objects can also be among them. All these particles orbit the planet individually. Their size can vary from less than one millimeter to about twenty meters. It is interesting that every ring has its own atmosphere, separate from Saturn’s atmosphere.

There are several theories about the origin of Saturn rings. Some scientists think that they could be the remnants of the planet’s foundation. Others believe that long time ago the rings were Saturn’s moons.

How Many Rings Does Saturn Have?

The question about the exact number of Saturn rings is rather difficult, but scientists have been able to give answer to it. Latin letters are used to classify the main rings. Here are their short descriptions.


As you can see, now we can talk about eight Saturn rings. But there is also the Phoebe ring, which was also discovered not long time ago. This ring has got a backwards orbit and is tilted a bit.

But the above mentioned objects are not the only Saturn rings, because this planet has also some divisions and gaps in them. The most widely-known of them are the Cassini Division2, the Janus Ring, the Anthe Ring Arc, the Methone Ring Arc, the Pallene Ring, and the Roche Division. So if we take into account all of them, we will get more than thirty rings.

But even now nobody can say for sure that people have been able to see all Saturn rings. Most probably, there are still more of them. 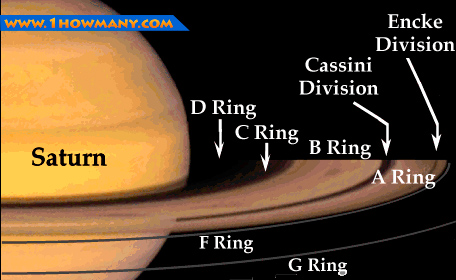